The following report is the second annual report of the Clean Energy Partnership (“Partnership”). The Partnership is a first-in-the-nation approach that partners the City of Minneapolis (City) with Xcel Energy and CenterPoint Energy, its electric and natural gas utility providers, to help the City reach its greenhouse gas emission reduction goals through energy conservation and renewable energy. Partnership goals come from the Minneapolis Climate Action Plan and the 2040 energy goals described in the City of Minneapolis Energy Vision 2014. This report provides descriptions and data related to the achievements of energy conservation activities in Minneapolis in 2016, renewable energy consumption, and overall energy consumption in the City. The report contains eight sections, which correspond to eight metrics that were approved by the Partnership Board as being critical areas of measurement in tracking progress toward Partnership goals.

*CenterPoint Energy’s total investment sum was initially reported as $7 million; the sum was corrected in July 2018 after this report was published

The citywide greenhouse gas (GHG) emissions inventory is an accounting of Minneapolis emissions from buildings, transportation, wastewater, and solid waste. Minneapolis has adopted targets to reduce community-wide emissions 15% by 2015, 30% by 2025, and 80% by 2050 (from the 2006 baseline) through the roadmap set by the Minneapolis Climate Action Plan.

According to the most recently available data, 2015 citywide GHG emissions are down 17.4% from 2006 levels, surpassing the 2015 reduction goal. Both natural gas and electricity consumption decreased for the second year in a row. The winter months of 2015 were warmer (fewer heating degree days) than in 2014, which resulted in some of the decreased natural gas consumption seen in 2015. The summer of 2015 was slightly warmer (more cooling degree days) than 2014. However, electricity consumption and the resulting emissions continued to decline in 2015 despite the warmer summer.

Since 2006, Minneapolis building stock has grown by 38,000,000 square feet (or 8%) while natural gas and electricity consumption has declined. In 2015, emissions from electricity were 31.8% lower than in 2006, representing the largest decline in the emissions inventory. Increases in energy efficiency and the reduced carbon intensity of electric generation, which declined by 27% over the last 10 years, led to the change.

Modifications were recently made to the City’s accounting of GHG emissions to make the annual inventory compliant with the Global Protocol for Community-Scale Greenhouse Gas Emission Inventories (GPC). The GPC is the global reporting standard used by the Compact of Mayors and other large participating municipalities. Revisions were made to 2015 and all previous reporting years, including the 2006 baseline year. More information on previous Minneapolis GHG inventories can be found at: http://www.minneapolismn.gov/sustainability/reports/sustainability_carbon 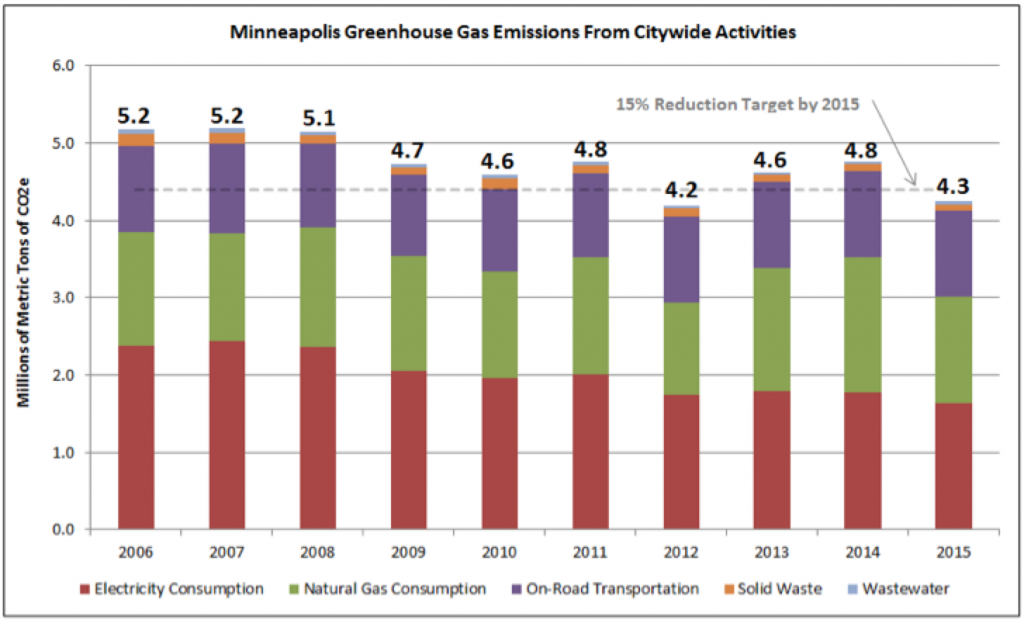 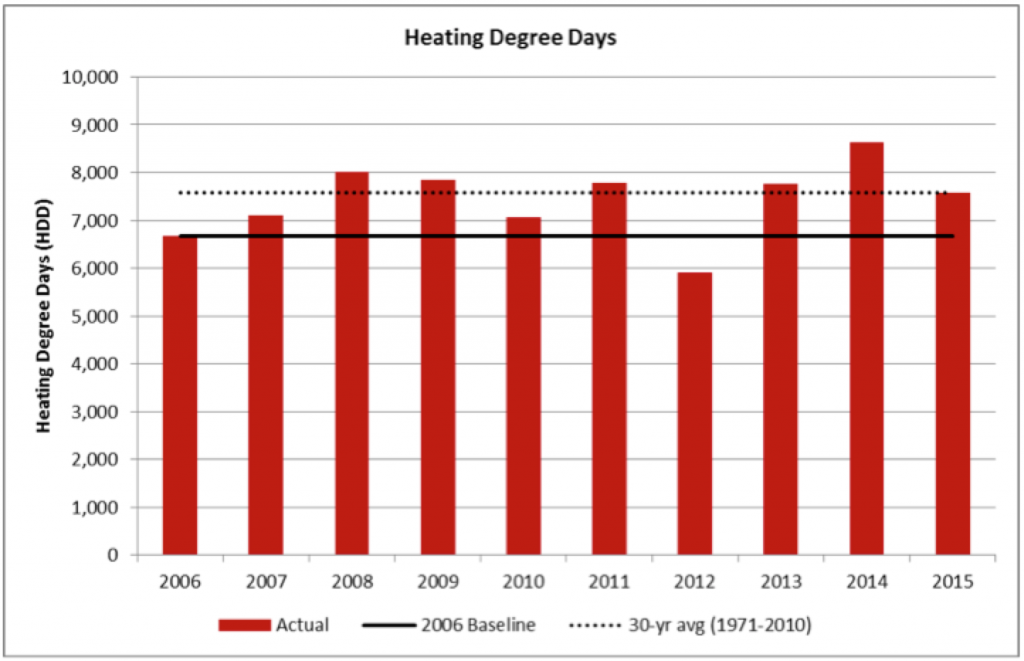 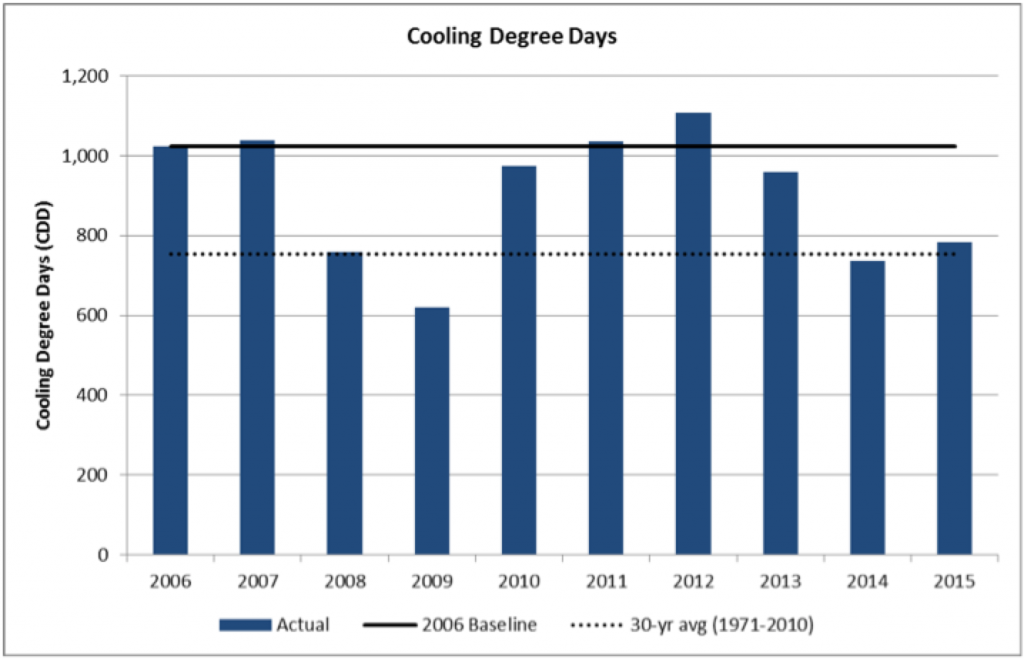 Private commercial buildings of more than 50,000 square feet and public buildings of more than 25,000 square feet benchmark as part of the Commercial Building Benchmarking and Transparency ordinance. Buildings subject to the City’s energy and water benchmarking ordinance make up 70% of the commercial space in the City. To help buildings comply with the benchmarking ordinance, Xcel Energy and CenterPoint Energy worked to provide necessary account and usage information to building owners and managers. The 2016 reporting year marked the first for the use of Xcel Energy’s online tool that automatically uploads usage information into the ENERGY STAR Portfolio Manager benchmarking platform, thereby improving customer whole-building energy data access. Xcel Energy and the City collaborated on the process by participating in the Department of Energy’s Data Accelerator Program.

Overall, 417 properties benchmarked and submitted calendar year 2015 data to the City in 2016. Buildings with property types able to earn ENERGY STAR scores showed a relatively high average score of 71 (50 is the national median and a score of 75+ qualifies for ENERGY STAR certification). Of benchmarked buildings that meet data quality standards, the average energy use intensity (EUI) and average weather-normalized EUI of 95 and 99 kBtu/sf respectively. Additional results, context, and analysis including weather-normalization are available in the 2015 Energy Benchmarking Report. The Minneapolis Benchmarking Results interactive map shows performance metrics for individual commercial buildings that report energy benchmarking data to the City.

In November 2016, the City celebrated the 2nd annual Minneapolis Building Energy Challenge, which encourages benchmarking buildings to reduce greenhouse gas emissions from commercial building energy use 15% by 2020. A diverse mix of 15 public and private buildings committed to the Minneapolis Building Energy Challenge. Two participating buildings, Calhoun Square and the City’s Royalston Maintenance Facility, were recognized for achieving the challenge goal of 15% greenhouse gas emission reductions. By participating in Xcel Energy’s lighting programs, the Calhoun Square building saved 222,191 kWh, 70.63 KW and received over $68,000 in rebates. Within the ENERGY STAR Certification Grant program, the City helped facilitate the certification of one building, and the Green Business Cost Share program incentivized 12 buildings to invest over $215,000 in energy efficiency projects that led to 612 metric tons of CO2e savings.

CenterPoint Energy and Xcel Energy continue to collaborate on ways to successfully address the complex needs of the commercial and industrial sector. Extensive new construction in the city in 2016 provided the opportunity to ensure many buildings went through the jointly delivered Energy Design Assistance (EDA) program, supporting long-term energy efficiency.

Both CenterPoint Energy and Xcel Energy saw significant increases in their energy savings, rebate dollars spent, and resulting cost savings for the commercial and industrial sector due in part to strong new construction and major renovation activity in the City. For example, the EDA program had a 155% increase in kWh savings and a 372 % increase in therm savings from 2015 to 2016. 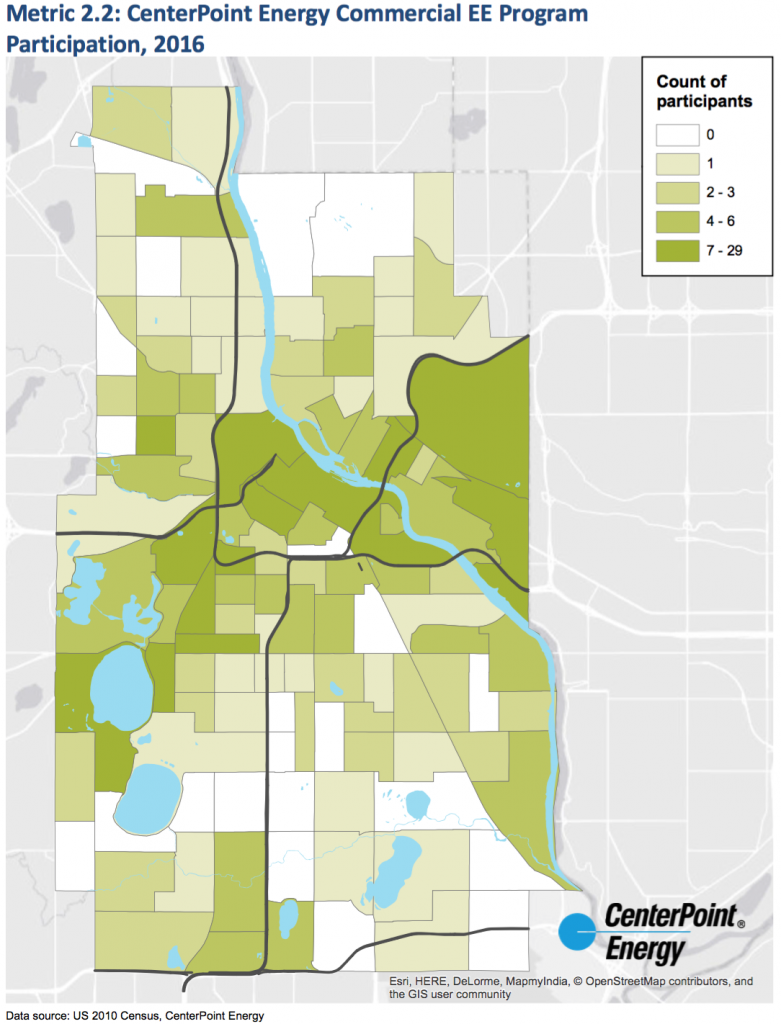 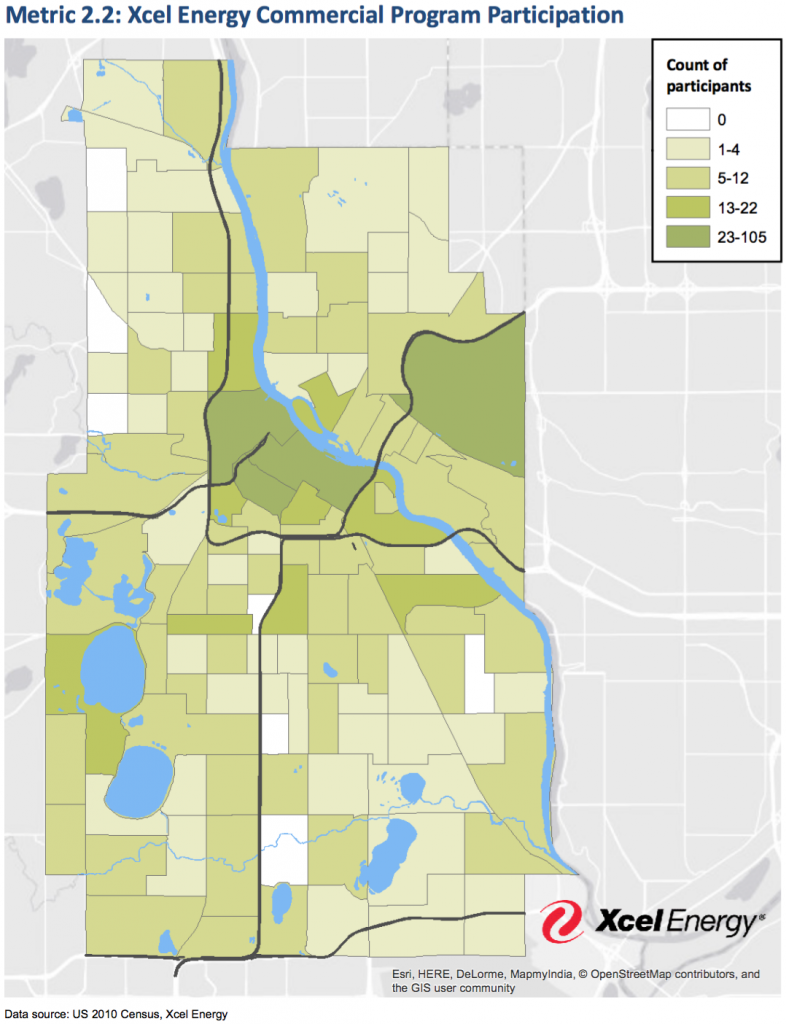 Xcel Energy provides electric service to Minneapolis customers. There are over 174,000 residential electric customers in Minneapolis. The average annual electric consumption per household is about 5,564 kWh per year. This results in approximately 2.0 metric tons of CO2e emissions annually per customer after accounting for carbon-free Windsource commitments by Minneapolis residents.

Overall in 2016, residential electric use increased by 2.6% and natural gas use dropped 7.9% from 2015 levels. The increase in electricity consumption is primarily attributable to an addition of 3,926 residential customers (2.2% increase) since 2015 and a warmer summer in 2016 than the previous year.  Natural gas reductions largely stem from both warmer than normal winter months in 2016 as well as energy efficiency improvements in homes. The sections of this report pertaining to Metrics 4, 5, 6, and 7 discuss specific residential energy programs that resulted in some of the consumption and emissions reductions in the residential sector.

Xcel Energy offers three renewable energy options in Minneapolis: Windsource®, and Solar*Rewards (Rooftop) and Solar*Rewards Community®. An additional program, Made in Minnesota, is administered by the Minnesota Department of Commerce via mandated rate-payer funding from Xcel Energy’s Renewable Development Fund.

Windsource is Xcel Energy’s voluntary energy program that allows customers to purchase some or all of their energy from renewable sources. The program is certified by Green-e-®, and supports additional local renewable energy.

Through Solar*Rewards, individuals install solar panels on their roof so they can produce their own energy. If production exceeds use, the extra energy is added to the grid and the customer receives a credit on their bill.

Xcel Energy’s Solar*Rewards Community program provides an easy way for residential and business customers to participate in solar without attaching an array to their home. Subscriber to a solar garden work with a solar developer to sign up and Xcel Energy credits the customer bill for the solar energy produced within their subscription. In 2016, we began seeing a ramp-up of the program that officially began in 2015 with five solar gardens developed and interconnected and 216 customers subscribed. 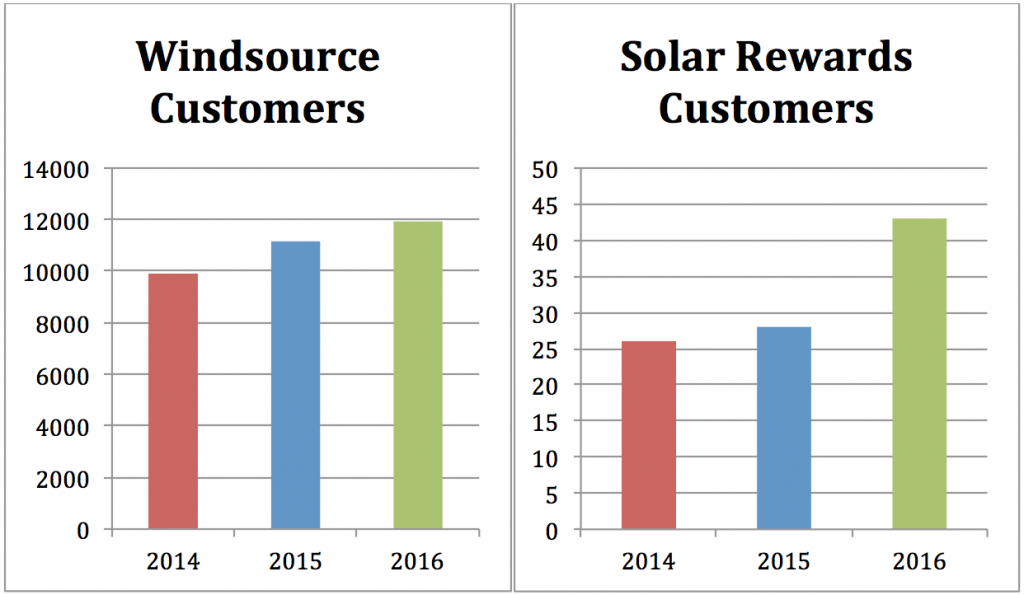 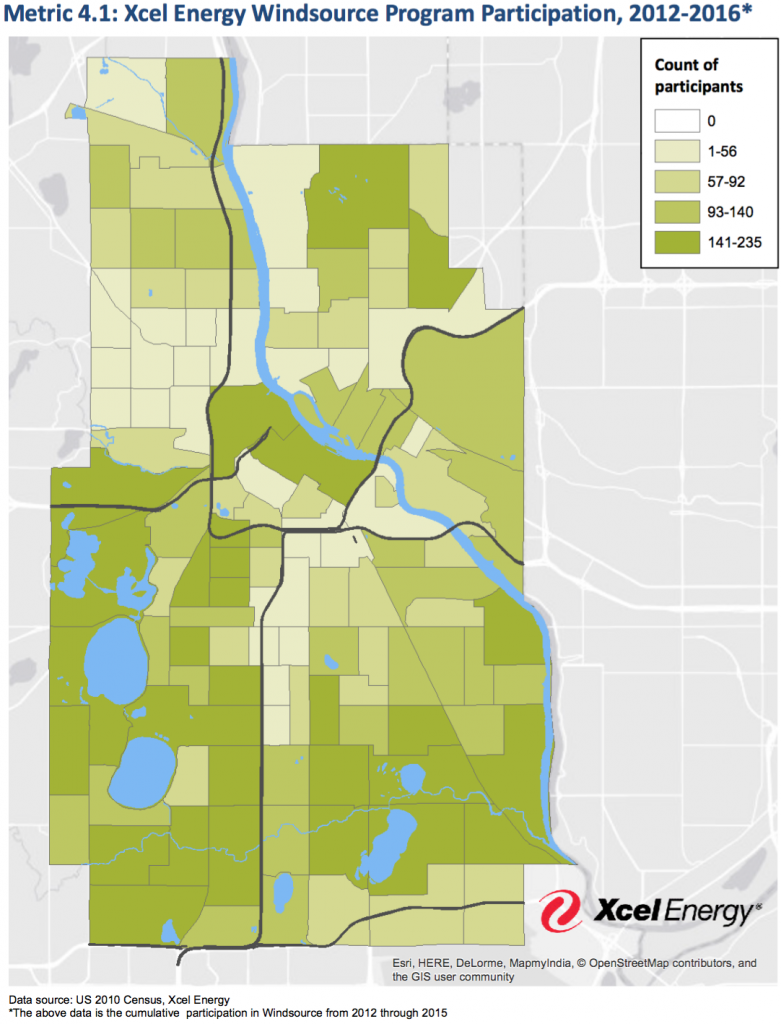 Delivered by the Center for Energy and Environment (CEE) on behalf of the two utilities, the Home Energy Squad (HES) performs a home energy audit to identify and discuss small energy efficiency home improvements with residential customers. The energy audits include direct installations of energy saving devices such as LED lighting, door weatherstripping, programmable thermostats, and other measures.

CenterPoint Energy and CEE implemented a pilot effort in 2015 and 2016 aimed at increasing the number of HES participants that moved forward with insulation and air sealing upgrades. This pilot proved successful and cost-effective in moving participants to these high-energy-saving projects and, therefore, the pilot services will now be available for all HES participants going forward.

From 2015 to 2016, HES participation dropped 30%. A large part of the change stems from 293 visits completed in four large apartment buildings in 2015; these apartment buildings would have gone through the new, jointly delivered Multi-Family Building Efficiency program in 2016, however, that program was not available in 2015. Adjusting for these buildings, the count of visits in 2016 is down 8% over 2015. Overall, approximately 10% of 1-4 unit residences participated between 2009 and 2016. The average participant in HES saves 11,000 kBtu annually, which is nearly 10% of the average total Minnesota household energy use. Although direct installations provide valuable savings, conversions to larger, higher energy saving projects provide the greatest impact. The City’s 0% financing initiative continued to drive these larger projects as shown by 32 loans that were used for insulation and air sealing upgrades, an increase of one loan over 2015. 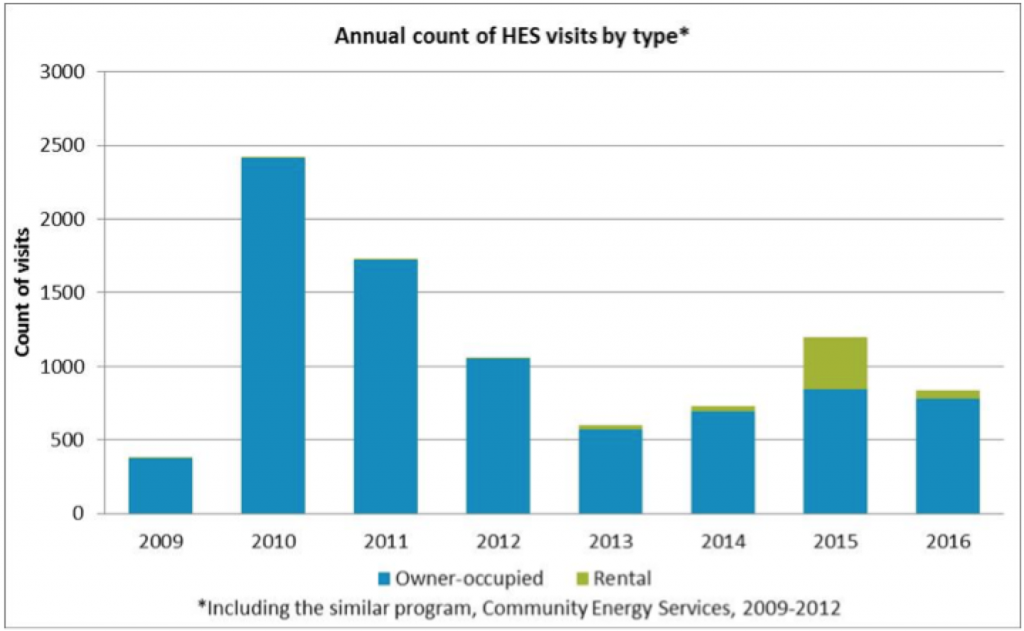 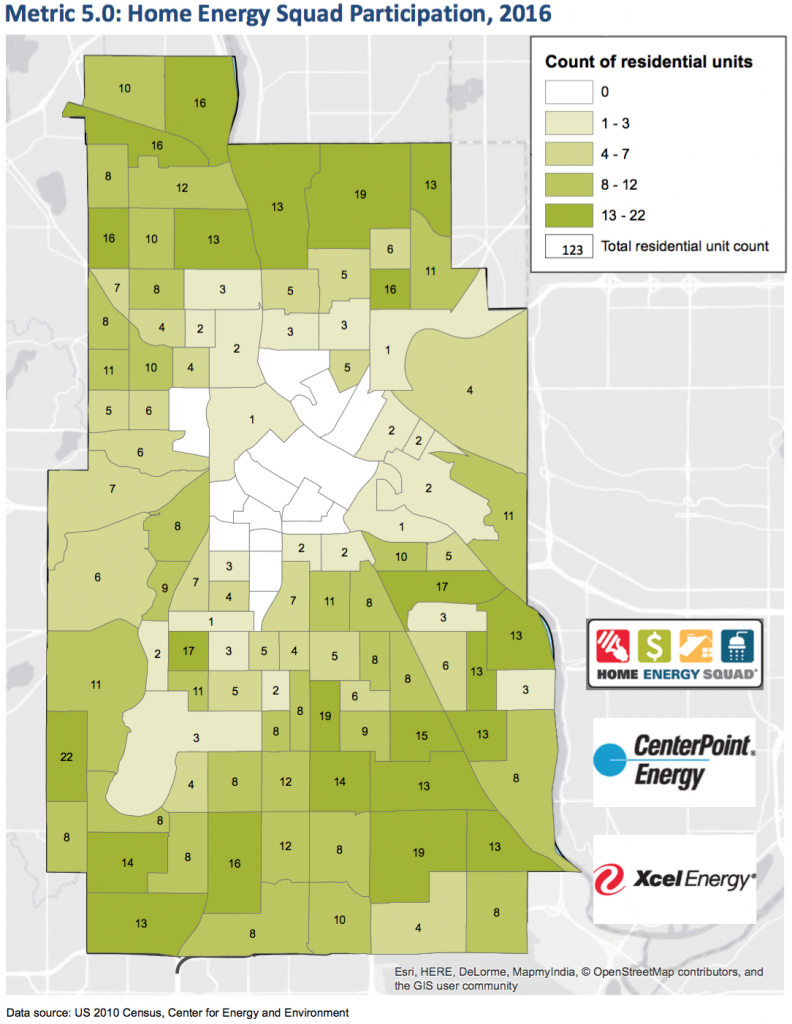 Comprehensive weatherization services as well as most other low-income utility energy efficiency services are offered at no cost to the customer. In addition to the utility energy efficiency offerings, the federal Department of Energy (DOE) provides weatherization funding for low-income households through the Weatherization Assistance Program (WAP). WAP funding is often combined with utility program funding in order to maximize efficiency improvements completed at a residence, by using all available resources.

Xcel Energy reached 50% more low-income customers through their low income conservation programs than in 2015. CenterPoint Energy saw a slight decrease in participation in its low-income conservation offerings. Much of the decrease occurred in the Low-Income Multifamily Rebate program, which may be due to a shift to the new Multi-Family Building Efficiency program for customers who would have previously used the Low-Income Multifamily Rebate program. 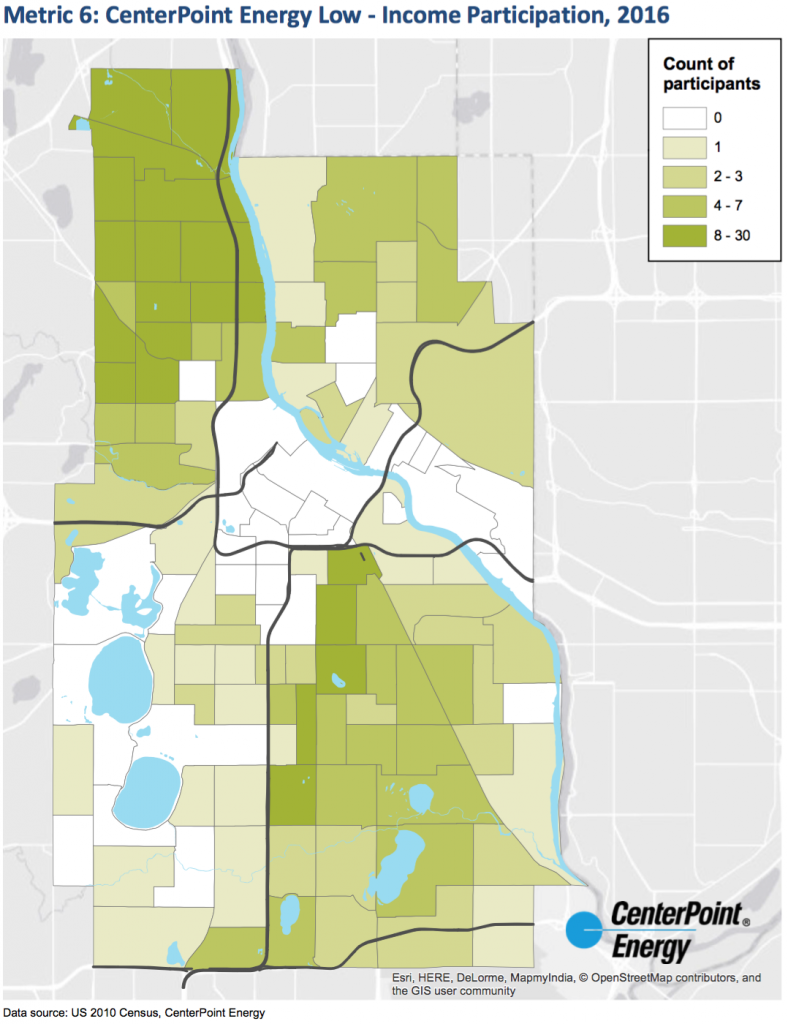 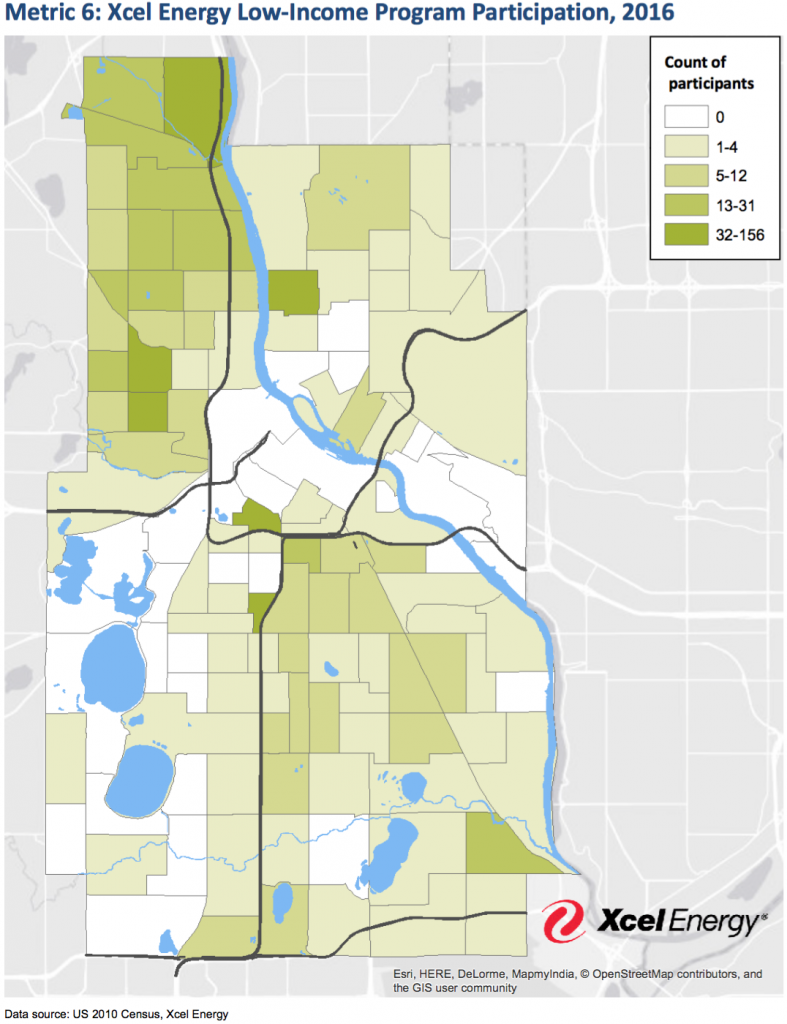 In 2015 and 2016, CenterPoint Energy partnered with the Center for Energy and Environment (CEE) to provide additional residential engagement services to Home Energy Squad (HES) visits in Minneapolis to encourage participants to make insulation and air sealing upgrades to their homes. The pilot effort was successful, resulting in a 10 percentage-point increase in the number of customers moving forward with recommended air-sealing and insulation upgrades compared to those not receiving the pilot services. Those customers who installed upgrades were eligible for rebates through CenterPoint Energy’s Residential Weatherization project. Due to the success of the pilot project, CenterPoint Energy expanded the pilot to be a permanent part of the HES project overall starting in 2017.

In addition, the City of Minneapolis made funds available to provide zero-interest financing as discussed in Metric 5.

In 2016, CenterPoint Energy’s Residential Weatherization project provided over $130,000 in rebates for 277 homes in Minneapolis. Of those homes, 233 (84%) received both attic insulation and attic air-sealing work. Seventy-two of the homes (26%) received wall insulation. This work resulted in approximately $42,000 of savings annually on heating bills for participants. 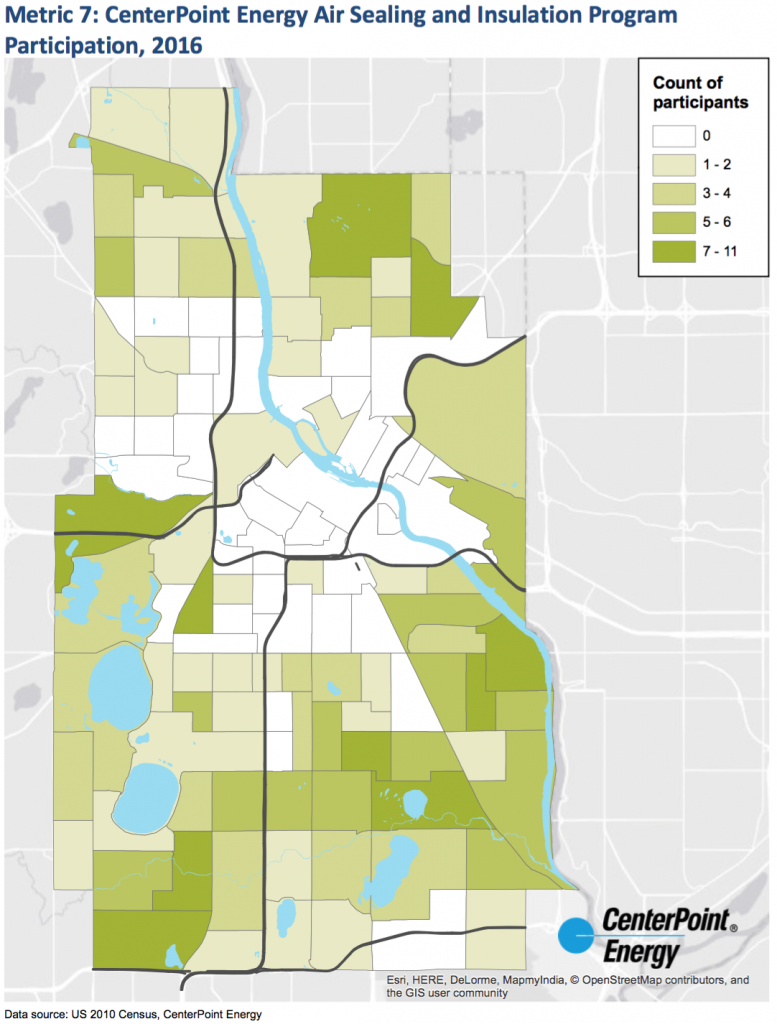 Generally, a program participant is a customer. The utilities measure customers by meter. Therefore a rental unit that is part of a larger building but is not separately metered is not considered a customer and not counted separately in the above table. 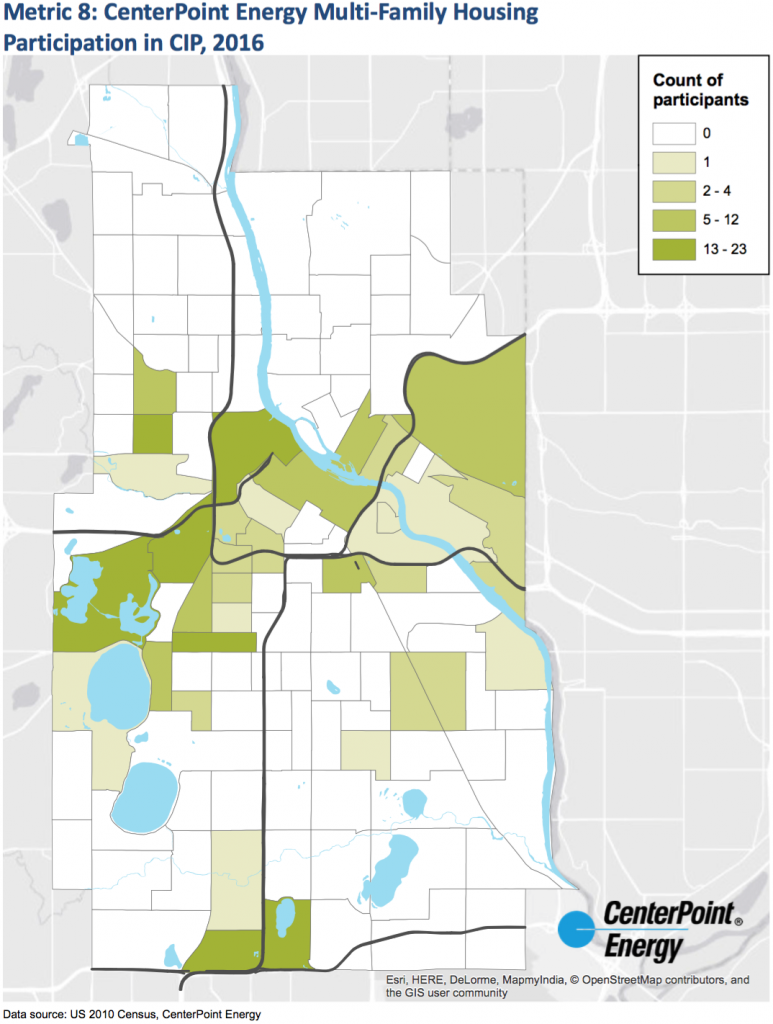 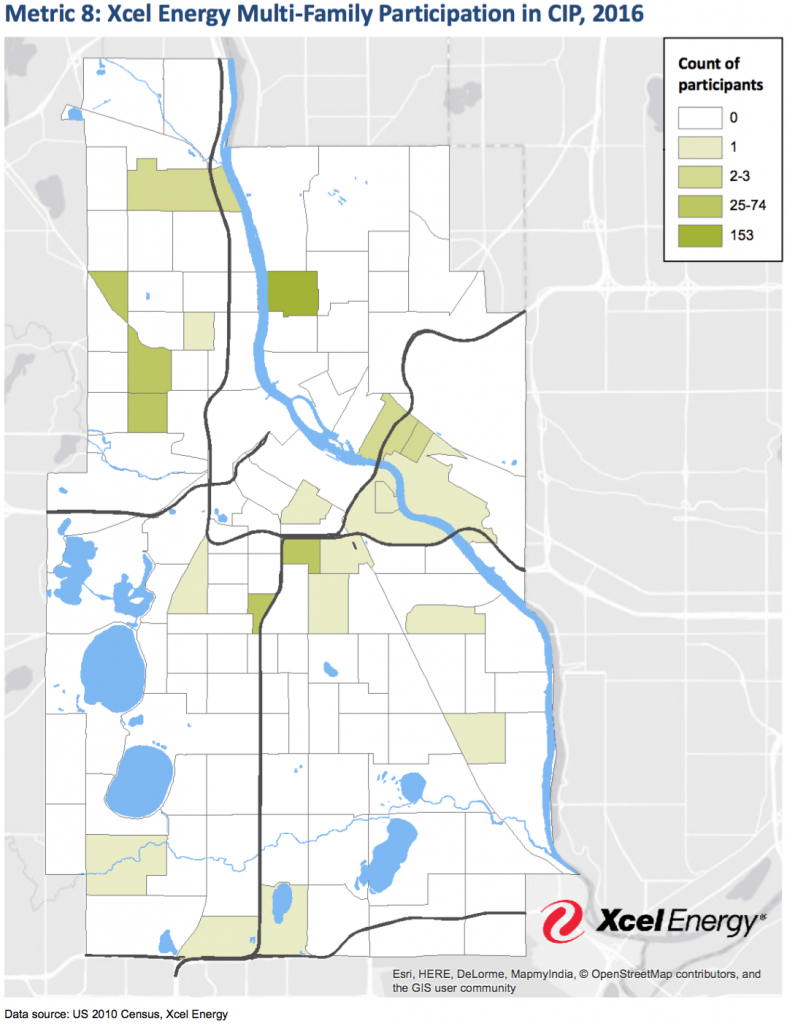 In 2015, demographic and socio-economic maps were developed to help the Energy Vision Advisory Committee’s (EVAC) Engagement Subcommittee to a) identify communities that may be under-represented in utility efficiency program participation and b) develop strategies to increase participation among those communities. Additionally, the maps were created to help meet the Clean Energy Partnership’s goal of ensuring that its work moves forward “in a way that advances equity.”

The Clean Energy Partnership hopes to learn more about the distribution of participation in utility efficiency programs through continued data gathering.

Minneapolis Population Characteristics and Environmental Indicators Map can be found at: http://www.ci.minneapolis.mn.us/sustainability/policies/WCMSP-187876